The State School number 3100 Ocean Grove was first proposed by Frederick Brown in 1890, and was opened by Miss Jane Ellis on the 21st March, 1890 with thirty one pupils in leased premises in The Parade.

The School was part-time with State School numbered 1313 Newington until it moved to its present site in Draper Street in 1892. The building was originally the school at the goldfields town of Steiglitz. The small, modest structure is now part of a complex of school buildings which reflect the changing history and culture of Ocean Grove.

The two cypress trees in the school grounds are said to have been planted by the Blackwell family who were early settlers in the area. Decreased attendance caused the school to be made part time with State School numbered 2029 Marcus Hill in 1928, and it was closed in 1930. It reopened in 1932 with a steady attendance that increased rapidly in the post war period of migration. 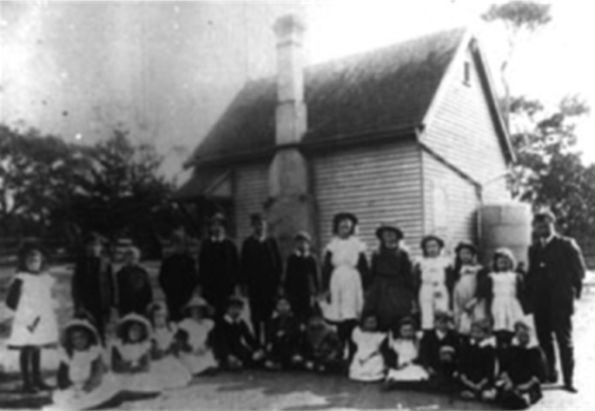 Ocean Grove State School in 1910 showing Mr. Hugh Clark and pupils. Hugh Clark taught at the school for almost 30 years and was Head Teacher from 1911 until 1925.

By 1960, there were three hundred pupils in eight classrooms, on a site now extended to five acres. Improvements effected by the committee, which first met on the 25th September 1911 with J.B. Menzies as Chairman, gained for the school the ANA Prize in 1966. Consistent work by the Mothers’ Club (now Parents’ Association) has provided excellent amenities and equipment.

The school continued to expand rapidly during the 1970s and 1980s with enrolments reaching 700 in some years. With the construction of a second government primary school in Ocean Grove in the Surfside area, the pressure was relieved on the Ocean Grove Primary School with a projected enrolment of approximately 450. In 2011 as part of the Federal Government’s Building the Education Revolution (BER) the school received a new state of the art learning facility equipped with a kitchen and flexible learning spaces to meet the needs of 21st century students.

Townsend, A. These Friendly Shores, p.378

Enrolments for next year are being taken now!